A few years after announcing their plan to open a collision repair business in Barrie, Ontario, Martin Monteith and his son, William, opened their second Zenetec location in January 2018 utilizing Symach equipment.

The 28,000-square-foot location includes a combination of collision repair, glass replacement and a fully-automated car wash and detail center.

The independently-owned facility also includes Symach’s FixLine conveyor system, which has six robots and is based on Drytronic electromagnetic wave technology. “This guarantees a perfect performance for all phases of the repair process such as body filler, primer and paint,” said Osvaldo Bergaglio, CEO of Symach. “The automation also drastically reduces cycle time.”

The shop includes the FlyDry and Easydry robot and KombiTron drying cabin that works in conjunction with the SprayTron booth.

“We believe our employees and customers deserve the very best,” said William, vice president of the company. “As we prepared to open our new facility, we felt Symach’s equipment would help us offer the finest in service, speed and accuracy.”

The new location is based on the team concept of fixing vehicles. “We move people to cars rather than cars to people, which helps with workflow efficiencies in the shop,” he said. “Symach takes that whole process to a new level.”

Zenetec’s new location is currently repairing about 45 vehicles per week and expects to eventually produce 90 per week. “Using Symach’s equipment, we’re hoping that we can work on more cars with fewer people because of the reduced waste,” said William. “We’ve increased our touch time by one day in the first three months and expect that to continue to improve.”

William said they also believe that by using the “latest and greatest” equipment on the market, it will help attract some younger staff to the business. “Symach’s equipment looks appealing; it doesn’t look like a traditional body shop,” he said.

Martin, president of Zenetec, first learned about the collision repair business in his hometown of Omagh in Northern, Ireland while attending high school and eventually opened his own shop. He moved his family to Barrie, Ontario, in 1989 and set up a 3,500-square-foot body shop in 1992, which he named Zenetec.

“My father jokes that it is a Greek word that means first-class accident repair but it’s really just a name he made up,” said William.

Over the years, they began providing glass installation as well as collision repair services. As the company expanded, they needed more space and relocated to a 21,500-square-foot building in 2000. “We were struggling to fix more cars in the space we had,” said William. A few years ago, they decided to build an additional location about three kilometers away.

After purchasing land for the second location and completing the engineering drawings, William attended the NACE show in Detroit, Michigan. He met Osvaldo Bergaglio and was introduced to Symach’s Italian state-of-the-art equipment. “I was very impressed with Symach’s equipment,” said William. “It was everything that I was trying to accomplish with the shop.”

After meeting Osvaldo, William invited him to travel to Barrie, Ontario to see the land for the new location and discuss the design of the building. He and his father also traveled to Italy and toured a few shops using Symach equipment.

William said they were so impressed with the high-quality, efficient equipment and technology, they decided to throw out their original set of drawings and start from scratch, so they could construct the building based on the equipment.

“Osvaldo helped us understand the size we needed and helped us with the design,” said William. One of the important components for the new location was incorporating big windows for customers to be able to view the body shop. “We want to show that we’re not hiding anything behind the wall and everything is very open,” said William. “Symach helped us bring that to life.”

Prior to opening the new facility, the staff was trained by Symach’s international team on how to best utilize everything.

“Our plan is to give customers a better impression and feel of the collision repair business and really focus on the customer experience,” said William. “We believe that Symach’s equipment will help us accomplish this.” 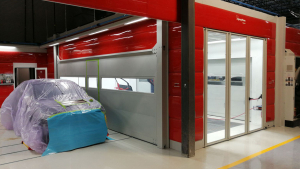 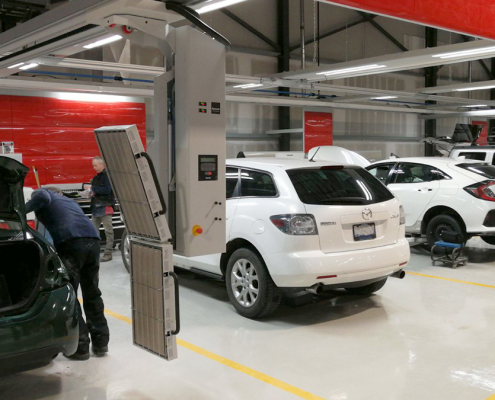