Symach has realized for AMBRA in Brescia (Italy) first bodyshop with the formula of FixLine KombiTron and FixStation for a production of 125 repairs week.

Symach already supplier of AMBRA since 2001 and in the last five years also as a technical consultant for training, organization and processes, has actively contributed to the industrial growth and professional alongside at all stages of the transition from craft to car bodyshop industry.

Today, thanks to Symach, AMBRA is able to offer average delivery time of 1.5 days for 80% of repairs, it can produce at least 25 repairs per day in a shift, having the operating cost 25% less than a conventional bodyshop compared Italian benchmark.

AMBRA has repaired in 2014 more than 3000 cars having a plan to rise to 10,000 by mid-2016 opening other 4 shops, according to the contracts and agreements with customers in place.

Ambra’s purpose built facility was designed by Symach using the company’s FixLine process – Symach’s new layout and repair process which, when combined with Drytronic technology and the SPAP painting cycle, provides for a 50% to 60% increase in productivity, as well as an increase of 1.5-2 repairs per week per technician.

FixLine reduces vehicle movements between the various repair stages from 7 to 3, as various stages of repair activities themselves are carried out on the CarMover in the semi-automatic line.

Ambra Car Service has produced a promotional YouTube video in partnership with Symach to promote its fast repairs concept.

Osvaldo Bergaglio, Symach’s Chief Executive Officer said: “Ambra’s General Manager Luca Gazzoli is reorganizing the bodyshop’s marketing to explain to customers the new quality of work and express service delivery, because now with the new formula FixLine he can guarantee a repair of one or two panels in two hours or less. I am happy that Luca will further improve and enlarge his company because that’s the purpose of a bodyshop that buys Symach.” 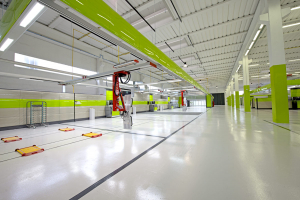