Symach has sold the first bodyshop in Burlington (Toronto) to CARS of Nick DiLuca, partner of CSN, a group with more than 330 bodyshops in Canada.

The new bodyshop will be operational in November and will be built entirely with the Symach equipment and with the FixLine formula. The process of preparation, painting and drying are automated with Symach robots.

The new bodyshop will repair 50 cars a week, reducing the cost of repair around 25% and reducing the key to key time to 1.5 days on average for more than 80% of the repairs.

Osvaldo Bergaglio: “I know well Nick and I would say that we also became friends in the past three years; in fact, Nick spent last three years, comparing our equipment and our formula of bodyshop with those available on the market. Once all the checks done, Symach is resulted the best in knowledge in design of the repair process, as well as for quality, cost and aesthetic design of the equipment. I personally started a little over a year ago to promote Symach in North America and this first result is very important to guarantee us a bright future, which is why I am investing in Toronto with the opening of a Symach store for the sale of products and for maintenance service because I want to do the best for my friends because from several years i have not only customers but friends…. Much more difficult to please them…..”

Nick DiLuca: “We are very excited about being the first shop in Canada to install the Symach system in our shop. The product is light years ahead if it’s competitors. We at CSN Cars are confident it will reduce are key to key time drastically, and enhance our customers experience.” 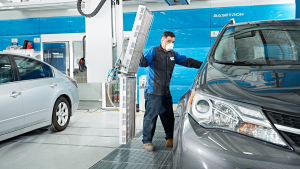 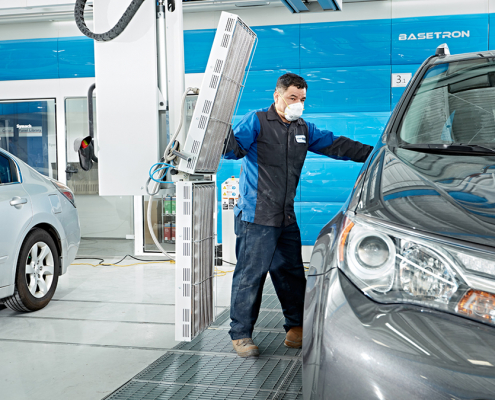 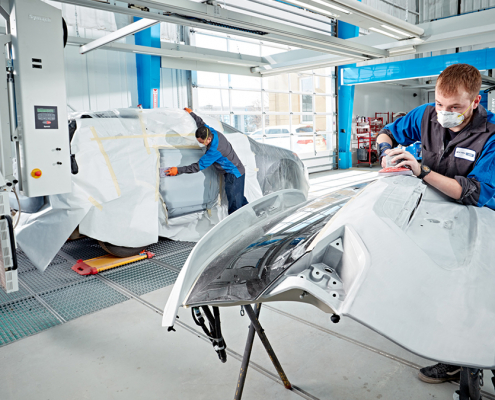 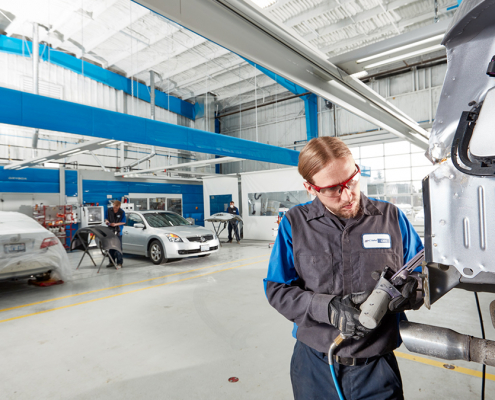 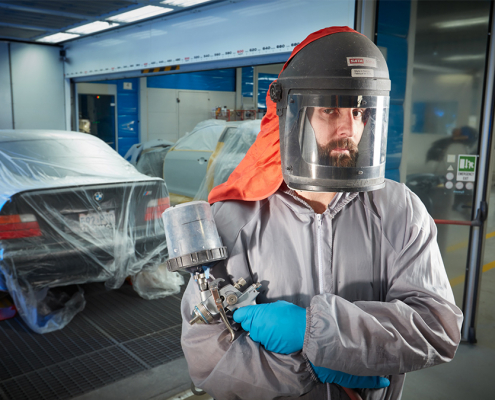 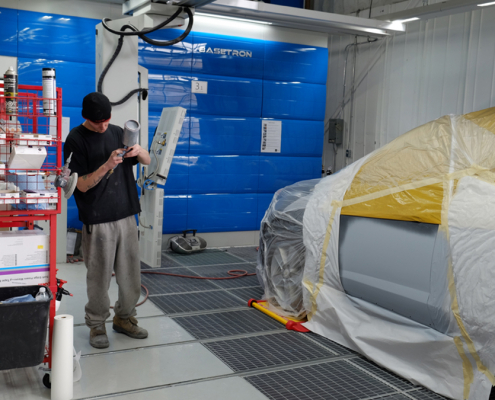 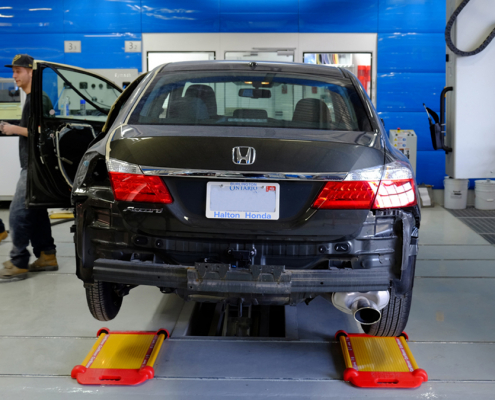 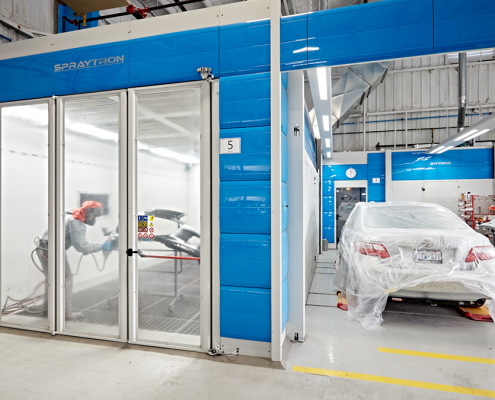 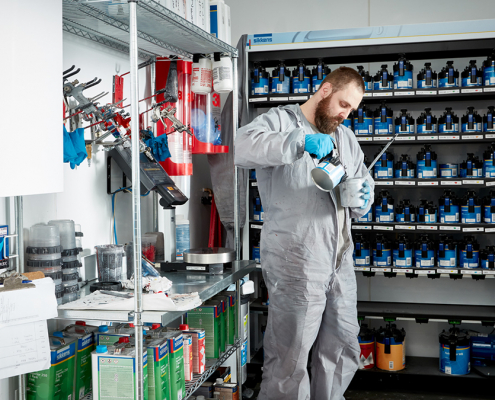 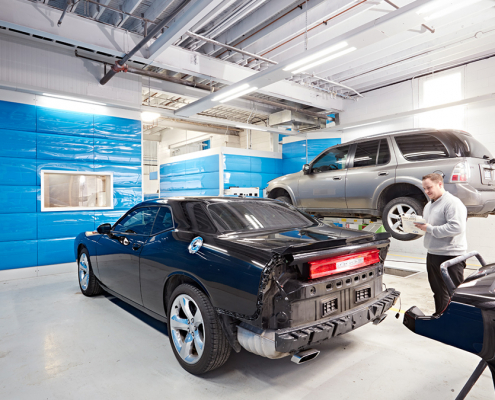 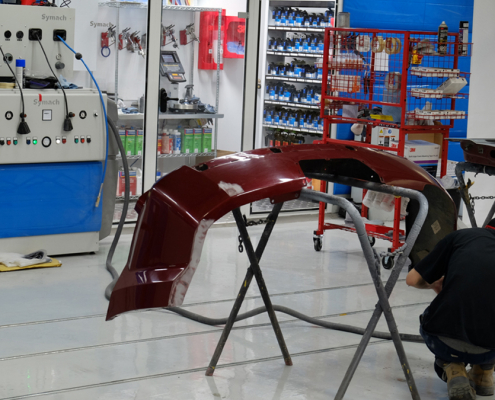 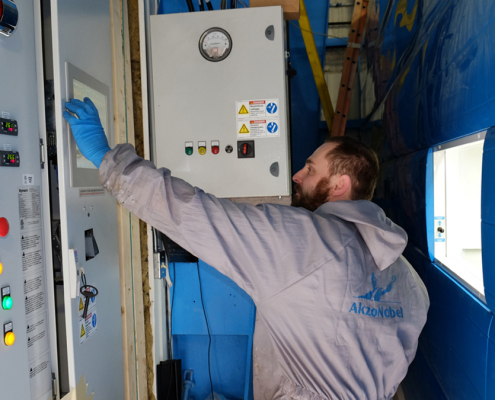 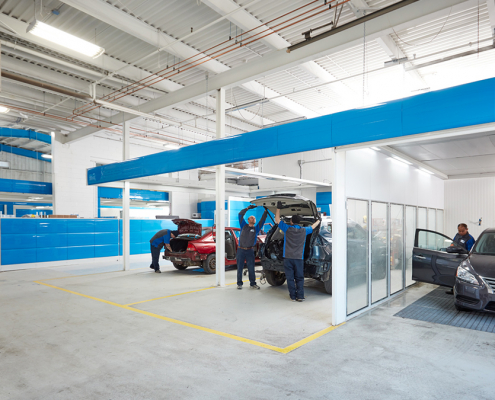 Burlington, Ontario — February 12, 2016 — Walking into the production area of CSN-CARS Collision is like stepping into the future. It may be a cliché, but that’s the best way to describe what you’ll find inside. The collision facility in Burlington, Ontario has recently completed the installation of the Fixline system from Symach.

Fixline is not a product, but a process. It completely revamps the process of collision repair from start to finish. It’s already up and running in numerous countries around the world, but CSN-CARS Collision is the first in Canada. Nick DiLuca, owner of CSN-CARS Collision walked us through the process during a recent visit to the facility.

“There are two stalls set aside for blueprinting and estimating,” he said at the start of the tour. “If you’re not doing an estimate, there shouldn’t be any vehicles in those stalls.”

As DiLuca says, the first step in the Fixline process is blueprinting the repair. This has become a standard for progressive collision repair facilities, but the next stages of the process are where things start to get really interesting.

Body filler is applied in the usual fashion if the repair requires it, but the time it takes to cure has decreased enormously. “Using the Symach system, we’re curing body filler in just a few minutes, rather than hours,” says DiLuca.

Next, primer is applied. “We’re using roll-on primer,” says DiLuca. “I’d seen it in use in Europe years ago, but we didn’t have time to wait for it cure. The Symach system has allowed us to use it efficiently.”

The vehicle is then masked and made ready for the paint booth. It’s during painting and curing that the advantages of the Symach Fixline system become most obvious. The entire system is programmable to a degree never seen before. The painter programs the system in advance and can then select the vehicle or parts from these programmed options. The painter can choose to input precise parameters or simply allow the system to scan the vehicle. Once it’s scanned, the painter can alter the program, for example to tell the system that curing is only required for certain areas. This dramatically speeds up the process. The system cures only what needs to be cured, using precision programming and robotics technology.

Part of the beauty of the Fixline process is that there is no wasted movement. Various stages of the repair are carried out on the Car Mover line. The system uses tracks in the floor and special rollers built by Symach to move the car from place to place. The system is not powered, but this isn’t necessary. Gloria Mann, Collision Repair magazine’s VP of Industry Relations, was on the tour. Despite being of slight stature, we found she could easily move a full-size passenger sedan along the track.

The equipment is advanced and so is the new process. DiLuca notes that they’re expecting a 40 percent increase in productivity once staff are fully acclimatized to the new systems.

“Productivity has already increased, and we’re just starting to see the benefit,” he says. “We’re getting cars in and out faster, and nobody is stressed out. It’s wonderful.”

With that said, there are some points to ponder if you’re considering installing the system at your facility. It’s a major investment in terms of time. To install Fixline, CSN-CARS Collision had to shut down completely for several months. That means a loss of revenue, and a prolonged shut down may encourage technicians to find other work. The installation is complex. Symach’s staff are experienced at this, but the sheer amount of equipment that needs to be installed makes it a lengthy process.

“We had four shipping containers of equipment delivered,” says DiLuca. “The teams from Symach were working 12 hours a day, seven days a week, but it’s a big job.”

A big job, but a worthwhile one. Fixline isn’t just installing new equipment or changing the workflow plan. It’s a total change in the way cars are repaired.

“The team from Symach did an amazing job,” says DiLuca. “They really know their business, and they work really hard. They had us up and running as quickly as possible, given how big of a change this was.”

According to Symach, the majority of modern repairs involve only one to three panels. However, most facilities employ just one repair process. While this is suitable for extensive repairs, it isn’t necessary for smaller jobs. The Fixline system uses three different repair and layout processes, based on the number of panels to be repaired. The system optimizes repair times and reduces labour costs. The facility gets more work done in a shorter time frame, and the technicians do as well. That’s a bonus for everyone.

DiLuca and his team did a lot of research before he made the decision to install the Symach system. DiLuca’s son, Fab DiLuca, even travelled to Italy to see the process in action.

“We wanted to explore all of our options. We had all sorts of manufacturers in here to show us equipment before we made the decision,” says Fab. “I went to Italy to see it in action, and not just at their training centre. I needed to see how it worked in a busy shop, see how the cars moved, and what I saw that it worked as flawlessly as they said it would. The things they sold us on were true.”